“Days Like These” was written for anyone who was ever 17.

Drawing on the autobiographical memory of performing ‘Susan’ from David Hare’s play Plenty  when she was 17, this performance plays out seemingly forever, repeating and reliving the memory of that certain time in everyone’s life, which can be so hard to let go of, over and over again. 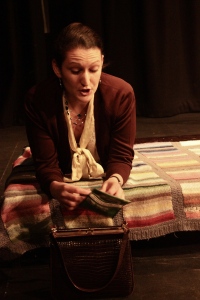 This play is about what  happens if we can’t let go of the past, eachrepetition of memory becoming an echo of the previous one, each time failing to adequate
ly re-capture that feeling of being 17.

The performance skilfully plays between performative register’s opening with and slipping back into naturalism whilst dipping into and between more contemporary (direct address, performance art, stand up) performance styles. This play is as much about questioning and

revealing the modes and registers of theatre as it is about history, memory, loss and grief.

“It left us far less certain but far wiser than when we entered… there were moments of    transcendence where we were all lost
in the moment” – audience feedback Jan 2012.

A short clip-show taken from a filmed dress rehearsal of “Days Like These”. from Gemma Alldred on Vimeo